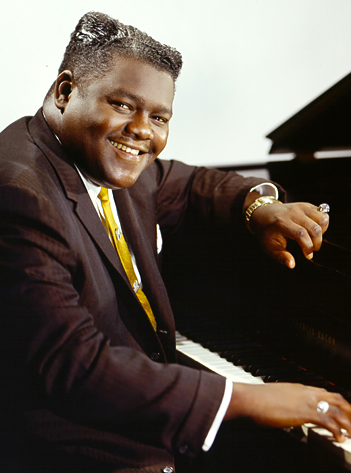 A career spanning more than five decades, producing over 25 gold singles and selling over 65 million records — and all in spite of his success and many accolades, Fats was always been a very humble man with a smile that lit up a room.

Antoine “Fats” Domino was born in New Orleans LA, in the lower ninth ward on February 26, 1928. His parents, Antoine Domino Sr. and Donatile Gros Domino were born in Vacherie, LA. Antoine Jr. was the youngest of eight siblings. During his adolescence he held many jobs ranging from working on an ice truck to working at the Crescent City Bed Factory. However, at a very early age he had an affinity for playing the piano. His brother-in-law, Harrison Verrett was very influential in his piano playing. Little did he know at that time that this would lead to an amazing career. Is unique piano style and voice what later attract millions from all over the world.

He married Rosemary Hall, his wife of 60 years and this union produced eight children. His music career began in 1949. He partnered with Dave Bartholomew, a bandleader and talented trumpet player, who produced and co-wrote his first record, “The Fat Man” in 1949. It was the first Rock and Roll record to ever sell over 1 million copies, soaring to No. 2 on the R&B charts.

Billy Diamond, his road manager, referred to him as “Fats” because the name was a symbol of importance and would be considered to be a classic. This this was just the beginning of a host of hits to follow. They Include “Blueberry Hill”, “I'm Walking”, “Ain’t That A Shame” and “I'm Walking To New Orleans”, just to name a few.

In 1986, Fats Domino received the Grammy Lifetime Achievement Award and was later inducted into the Rock and Roll Hall of Fame. On November 5, 1998, at The White House, he was awarded The National Medal of Arts from then President Bill Clinton. These are some of the countless awards he has been honored to receive over the years.

His career spanned for five decades which produced over 25 gold singles and sold over 65 million records. In spite of his success and many accolades, he was always a very humble man with a smile that lit up a room, and the love of his fans fans was immeasurable, and they undoubtedly loved him back. They will forever be in his heart and soul.